language can never point out anything specifically, only eliminate sets of possibilities (“possible worlds”  for the modern philosopher or logician) from our consideration. That is, language – and therefore logic – can only say what isn’t the case. And that no matter how many possibilities were excluded by language, i.e., how specific our language, an infinite number would still remain (a now well-known property of infinite sets.) If, for example, we say that a friend of ours has red hair, someone listening to us knows that our friend doesn’t have black or light blonde colored hair, but not what precise shade, of all the infinite shades of red that are possible, their hair is. Nor do they know from what we’ve said how tall, or heavy, or witty our friend is. The possibilities are still infinite. 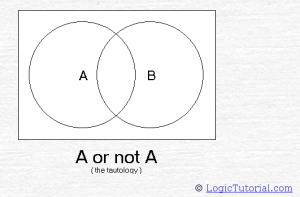 Visit the link and play with those interactive diagrams.   It appears that to “say more” or “be more specific”, we need to exclude more possibilities.  If what we say does not exclude any possibilities, our language becomes meaningless. “A or not A”  does not exclude any possibilities.  It’s a meaningless tautology.  To create meaning, we need to draw lines between concepts.  We need to separate “A” from “not A”.  When we draw the line between “I” and “not I”, we become self-aware, conscious of who we are, our identity.

Sorry, wrong Genesis.  This one:

1 In the beginning God created the heavens and the earth. 2 Now the earth was formless and empty, darkness was over the surface of the deep, and the Spirit of God was hovering over the waters.

6 And God said, “Let there be a vault between the waters to separate water from water.” 7 So God made the vault and separated the water under the vault from the water above it. And it was so. 8 God called the vault “sky.” And there was evening, and there was morning—the second day.

9 And God said, “Let the water under the sky be gathered to one place, and let dry ground appear.” And it was so. 10 God called the dry ground “land,” and the gathered waters he called “seas.” And God saw that it was good.

I know, this does not sound like a factual account and science tells us that things may have appeared in a slightly different order.  It does not seem to make sense that earth appeared before light and light appeared before any source of it.  But what does make sense (at least, to myself) is that there is a lot of separation going on here.  And separation of “A” from “not A” creates meaning.  This is how the universe is conceived in our mind.  Separation of concepts is the beginning of self-consciousness (realizing what is “I” and “not I”) and understanding of the universe.

But how is all this related to the physical universe?  Let me note first that all these relations and separations between ideas and concepts exist only in our mind.  What seems related to me may not seem related to you.  My idea of the universe is  different from another person’s idea.  So, if you don’t see the connection, I would not argue, to be consistent with one of my fundamental beliefs.  But, if you are interested, read on.

In 1920’s, a Belgian Catholic priest Georges Lemaître  suggested based on various observations that the universe is expanding  debunking the theory that religious people are backwards and don’t get science.  Tracing this expansion back in time, one can conclude that approximately 13.7 bln. years ago, the universe was quite small and seems to have a beginning.  How close can we get to this mysterious “0 seconds” in universal time?

Quantum mechanics tells us that space and time are not continuous.  They are discrete.  There is a smallest measurable length called Planck length

According to the generalized uncertainty principle (a concept from speculative models of quantum gravity), the Planck length is, in principle, within a factor of order unity, the shortest measurable length – and no improvement in measurement instruments could change that. — Wikipedia

Within the framework of the laws of physics as we understand them today, for times less than one Planck time apart, we can neither measure nor detect any change. — Wikipedia

It seems that within the first 10−44 s of existence of the universe, we cannot detect any changes any more. The time stops.  And when the universe was, perhaps, as small as 10−35 m, we cannot measure any distances either.   It appears that the universe did not start at “0 seconds”.  It started right after the first Planck time interval.

the time before which science is unable to describe the universe.  At this point, the force of gravity separated from the electronuclear force.

“Meaning is exclusion” has another interesting implication: all-inclusive and all-exclusive concepts are meaningless.  “God created everything” is not a false statement.  It just does not have much meaning if we try to explain how something came into existence.  Omnipotence and omniscience have the same issue.  This may be a topic of a different discussion.

2 thoughts on “Meaning is exclusion”